In the communist realms, the conditions that German POWs, many just kids, endured on the Eastern Front were beyond grim and did not follow any accepted protocol for treatment of captured soldiers. Under the provisions of the Yalta Agreement, the U.S. and U.K. had agreed to the use of German POWs in the Soviet Gulag as “reparations-in-kind,” but comparatively few German were taken alive before Stalingrad. Most were shot and many were mutilated alive. Out of the 90,000 Germans who marched into Soviet captivity at Stalingrad, only 5,000 ever returned: 40,000 did not survive the march to the Beketovka camp, where another 42,000 perished of hunger and disease. Those POWs that made it alive to separate camps in Siberia and elsewhere in the western Soviet Union were forced into slave labor and endured frequent beatings, brutal torture, poisoning and execution. Thousands more captured soldiers were executed on the spot and thrown into mass graves. Food and water were always scarce, living barely primitive. The result was an unacceptable rate of death. 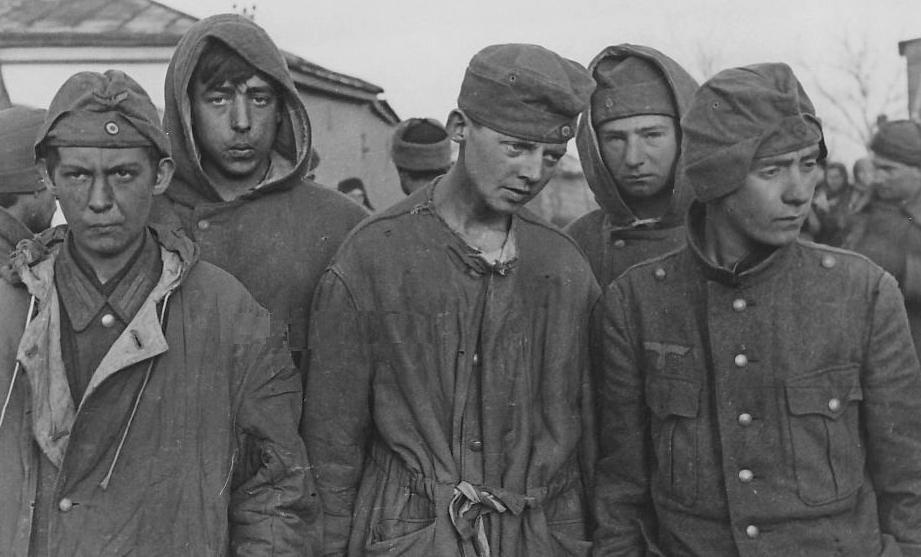 The gulag’s daily food ration was padded with 400 to 800 grams of bread, more than half of the prisoner’s daily 1200-1300 calories. The most productive workers received a modest food bonus (ironically, the Morgenthau Plan for occupied Germany suggested the same allotment of 1300 calories a day per German, while the suggested minimum requirements for heavy labor are from 3,100-4,000 calories per day). In the gulags, the prisoner’s food ration was linked to his production. Realizing that the most productive work done by prisoners is in the first three months of captivity, after which they were too debilitated to perform well, the exhausted prisoners were simply killed off and replaced with fresh blood, ensuring a constant flow of new labor.

Because the German POWs had been conveniently redefined as “disarmed enemy forces,” Allied captors did whatever they wanted with their German captives and even bartered them away to others for use as slaves. In fact, in a “Re-education” bulletin distributed by the “Special Service Division, Army Service Forces” of the U.S.Army in 1945, tacit approval is given for the intentional transfer of German POWs from Allied hands to the genocidal Red Army ala Morgenthau’s genocidal plan:

“Many German prisoners will remain in Russia after the end of war, not voluntarily, but because the Russians need them as workers. That is not only perfectly legal, but also prevents the danger of the returning prisoners of war becoming the core of a new national movement. If we ourselves do not want to keep the German prisoners after the war, we should send them nonetheless to Russia.” 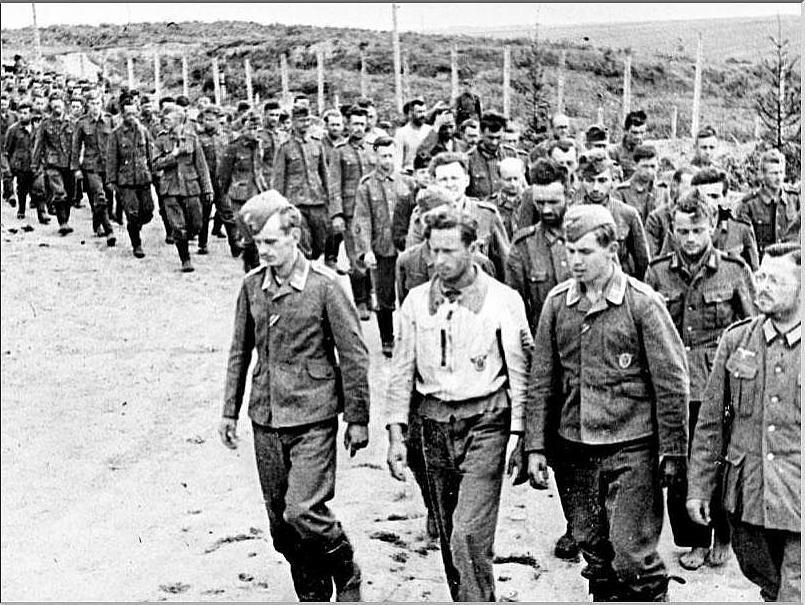 Long columns of German prisoners were marched on foot hundreds of tortuous miles toward their doom in Stalingrad, Kiev, Kharkov, Moscow and Minsk where most were starved and worked to death. Very few ever saw home again. Although it was always strongly denied, Morgenthau himself said his plan was implemented. In the New York Post for Nov. 24, 1947, he wrote, “The Morgenthau Plan for Germany… became part of the Potsdam Agreement, a solemn declaration of policy and undertaking for action…. signed by the United States of America, Great Britain and the Union of Soviet Socialist Republics.”

The fates of thousands upon thousands of German soldiers, many just kids, surrendered to both the Allies and especially the Soviets have never been accounted for and any attempts to uncover the truth of their disappearance have been halted. Between 1941 and 1952, millions of German POWs died in the Gulag. The last surviving 10,000 of them were not released from the Soviet Union until 1955, after a decade of forced labor. About 1.5 million German soldiers are still listed as missing in action and join the ranks of those who vanished while under Soviet captivity.

The Red Terror was let loose on surrendered German POWs in eastern Europe from Czechoslovakia to Poland and beyond. Many were simply shot and thrown into mass graves, others were tortured and mutilated first, and these retributions extended even to young boys. German POWs who fell into the hands of the Yugoslav hordes suffered horrible fates. After 1986, a report appeared showing that out of about 194,000 prisoners, up to 100,000 died from gruesome torture, murder, horrible conditions, disease and intentional starvation. 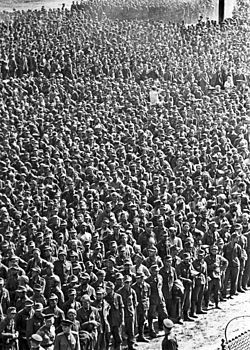 Around 93,000 ethnic Germans who lived in the Danube basin from 1939 to 1941 served in Hungarian, Croatian and Romanian armies, and they remained citizens of those countries during the war (many of these ethnic Germans served in the “Prinz Eugen” Waffen SS division of about 10,000, which automatically gave them German citizenship). 26,000 of these soldiers died, over half after the end of the war in Yugoslav camps. When most of the “Prinz Eugen” division surrendered after May 8, 1945, over 1,700 of them were murdered in a village near the Croat-Slovenian border and the other half was worked to death in Yugoslav zinc mines near the town of Bor, in Serbia.

Aside from these Danube German soldiers, over 70,000 Germans who had served in regular Wehrmacht died in Yugoslav captivity from revenge murders or as slave laborers in dangerous work. These were mostly troops of “Army Group E” who surrendered to British in southern Austria on May 8, 1945 only to have the British turn about 150,000 of them over to vengeance fueled Communist Yugoslav partisans who dealt with them brutally.

The fates of the remaining captured German troops in Yugoslavia was murder, both fast and slow. First, up to 10,000 died in Communist-organized “atonement marches” (Suhnemärsche) which stretched 800 miles from the southern border of Austria to the northern border of Greece. In most instances, the prisoners were all tied together and forced to walk barefoot with no food or water. As some dropped off one by one on these death marches, others were executed or tied together in smaller groups and thrown into rivers where they were all shot for sport and drowned.

On November 1, 1944, the Council for the Liberation of Yugoslavia declared all Germans “open prey” and less than half of the German POWs and ethnic German civilians survived the partisans’ genocide during this time. Then, later in the summer of 1945, many more German POWs were murdered in mass executions or thrown alive into large karst pits along the Dalmatian coast of Croatia. For the next 10 years, from 1945 to 1955, as was the case in the Soviet Union and other communist countries, 50,000 more German prisoners died from being worked to death as slaves and from the results of disease, starvation or exhaustion.

Thousands of German and Croat soldiers captured in the final days of the War were coldly executed and buried in mass graves found in western Croatia. As of October 2007, 540 secret mass graves had been registered across Slovenia, believed to be holding up to 100,000 bodies. Since that time, many more have been unearthed.

A site recently uncovered at Harmica, 50 kilometres north-west of Zagreb, holds the bodies of 4,500 soldiers, including 450 German officers, executed by the communist partisans. The bones were found in six separate caves and laid in trenches upon discovery. The victims were troops of the 392 Infantry Division, set up by the German command in Croatia in August 1943 led by Lt. General Hans Mickl. In other caves, POWs were herded in and were gassed to death after the entrances were sealed. In previous discoveries of mass graves of both civilians and military, the remains wore no clothing and had been mutilated, burned, beaten, dismembered or suffered other atrocities. In 2009, “hundreds” of mummified corpses shot by Tito’s Partisans were found near Lasko in Slovenia. Croatia’s Interior Minister said there could be as many as 840 mass graves in Croatia alone and estimated another 600 in neighbouring Slovenia and around 90 in Bosnia-Herzegovina.

View all posts by WW2Truth

Adolf Hitler The Man Who Fought The Bank

Other Lossess Documentary By James Bacque

Hellstorm: The Death of Nazi Germany

Questioning the Holocaust: Why We Believed

The Secret Behind Communism

The Lion: Europeans Rise Up

Were the Germans Really That Stupid?

Not a Single Jew Died in a Gas Chamber

The Lie of the 6 Million

Warwolves of the Iron Cross

Nordhausen: Epitome of the Big Lie

The Myth of German Villainy

The Bad War By Mike King

Breaking the Spell, The Holocaust Myth and Reality

What Really Happened at Auschwitz?

The Shoah: The Biggest Hoax of the 20th Century?

David Cole on the Holocaust

The Jewish Ethnic Cleansing Of Europeans

May the flame of fascism live on forever

The Voice of Ethnic-Europeans Worldwide

SICK OF THE BS!